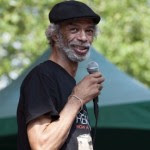 There have already been many tributes to Gil Scott-Heron who passed away last weekend. He was 62. Since the usual allocation is three score years and ten, he was comparatively young. But it's maybe not really too surprising that he sold himself short. There's no doubt that he had his demons, sadly, particularly in latter years when extended periods of drug use and consequent imprisonment must have taken their toll.

His best known pieces*--"The Revolution Will Not Be Televised", "B-Movie", "Johannesburg"--were erudite, acerbic and witty comments on the political landscape but they were all very much of their time. Their references to Watergate, Reaganomics, Spiro Agnew, Caspar Weinberger et al are really no longer meaningful for anyone who's under forty years old. The world is poorer, not just for his loss, but also because we never really got to hear his thoughts on the Dubya era, Abu Ghraib, the Tea Party Movement, and so many more of the issues of more recent times. For me this is a large part of the tragedy of his latter years, of his death.

A huge amount of credit goes to Richard Russell, owner of XL Records, for coaxing Scott-Heron back into the studio and for watching over his work on I'm New Here, last year's "comeback" album, a poetic masterpiece. Russell's trip-hop/dubstep electronica is a far remove from the jazz/soul medium of GSH's earlier career but it's the perfect counterpoint to Scott-Heron's more personal, less politicised, take on the twenty-first century.

One of the consequences of the release of I'm New Here was the round of promotional TV and newspaper interviews which meant that GSH and his work were exposed to a whole new generation of music fans. He even got pride of place on Newsnight in a clip which, in the way of these things, has since been added to YouTube. Cringe with me as Jeremy Paxman hails "The Revolution Will Not Be Televised" as possibly the greatest rap song of all time. (I'm sure he would know.)

This interview was filmed at round about the same time. I think it's a fitting tribute.

(The newspaper obit which most struck a chord with me was Suzanne Moore's piece in the Guardian.)

* Some of them songs yes, but others really poetic monologues set to music. I'd prefer to play down the rap/hip hop connection. Unlike most commentators, it seems.
Posted by Hoops Hooley at 12:22 AM

I saw GSH live at Rutgers, probably in 1977 or 78. It was powerful and scary, and he seemed to be fomenting revolution right there in the audience that night. My favorite work of his remains "The Bottle."

I'd like to have seen him in his heyday. Thankfully I did get to a couple of his London gigs in latter years. He was still pretty articulate about the sorry state of the world even if by then some of his material was a quite old.

As you say though songs like The Bottle are pretty timeless anyway.